What Is Ascorbyl Glucoside?

Ascorbyl Glucoside, popularly known as AA-2G, is a stable type of vitamin C that can be mixed in water immediately. It is synthesized by glucol and L-Ascorbic Acid.It is effective both in whitening to brighten the skin. And the reduction of free radicals Stimulate the synthesis of collagen of the skin.

At the risk of channeling overly complicated, high school chemistry class vibes, ascorbyl glucoside is a water-soluble form of vitamin C that’s combined with glucose, a sugar. In the world of vitamin C and its derivatives, l-ascorbic acid is the most potent, pure version (just like retinoic acid is when you’re talking about retinoids).Once ascorbyl glucoside is absorbed into the skin, an enzyme called alpha-glucosidas breaks it down into l-ascorbic acid. This is why you then get all those awesome vitamin C effects such as skin-brightening and wrinkle-smoothing,in this case, because it’s undergone a conversion process, it’s much less likely to cause irritation.

- Ascorbyl Glucoside is stable even in water. Or the heat does not exceed 40 degrees, making it easy to mix.

Figure 2: Comparison of uptake into fibroblast in the subcutaneous layer. Ascorbyl Glucoside can be absorbed into the skin for a longer period of time. Even at lower levels of Vitamin C L-Ascorbic Acid in the first

Figure 3: Comparison of skin applications where the degradation of the skin Ascorbyl Glucoside and is easily applied, even compared to L-Ascorbic Acid, which can be used immediately without further degradation. 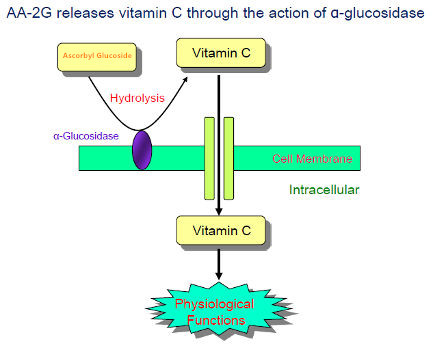 Benefits of Ascorbyl Glucoside for Skin